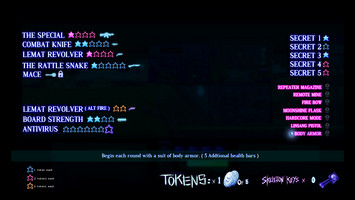 Hey there, this is just gonna be a quick summary to try to explain what's in this game so far and what STLD is all about.

As of now STLD Redux episode 02 has two modes of gameplay: 10 minute survival and 18 minute survival. You can also unlock hardcore mode for players who are familiarized with the gameplay and want an extreme challenge.

There are over 20 usable weapons in this Episode, they are discovered/earned/unlocked through various means.

The game is an attempt to capture a horror movie experience. The weapons are designed so they each have their own quirk. The game itself acts as one giant easter egg with layers under layers of things to discover and utilize until finally you are an extremely destructive weapon.

Environments are a deadly and necessary advantage.

There is a torturous learning phase. I recommend an xbox controller ( fully supported ) . A keyboard also works fine, and actually may end up being ideal for some users.  I haven't had a chance to test this personally but this should make whatever pc gamepad you have act as an xbox controller if you don't own one. https://github.com/x360ce/x360...

Tokens are awarded after successes and failures. Tokens can be spent in the Reward menu to strengthen the characters arsenal.

Skeleton Keys are a superior version of the token and offer rewards of a higher tier. You can earn skeleton keys by surviving 18 minute mode or completing any mode on hardcore.

I'm working on an interactive tutorial for new players, I apologize there is not one just yet!

There is a final patch in the works for STLD EP 02. This should be ready within about 3 months. ( Sales and community demand may impact the development speed ) This patch will be completely free. ( NOT DLC ) It will pack in quite a bit of new content for EP 02. I'm calling this patch "STLD: Night Mist"

I'm in the process of fine tuning the main characters voice files, there was about 60 added last night so she might be a little chatty, I will be fixing that as soon as I can.

After the final patch ( STLD: Night Mist ), I will launch a kickstarter for Episode 01 remaster. If that kickstarter is successful then I will connect the levels and future levels with an arcing story with voiced cut-scenes  and bosses for each chapter including Episode 01 and 02. This has all been written down and planned for some time. Additionally if the kickstarter project is a success Episode 01 remaster will be released freely to the public acting as a demo for the rest of the series.

As a bonus here's a Weapon Tip video I did a little while back that helps to explain combat with the knife. Hopefully it will be some help. Probably it will just overwhelm you. Who knows!

Good luck out there!